“The Center for Disease Control (CDC) considers increases in motor-vehicle safety one of the greatest public health achievements of the 21st century, with the annual death rate declining from 18 per 100 million vehicle miles traveled to 1.7 per 100 million VMT in 1997, a 90% decrease. However, traffic-related tragedies are still prevalent, particularly in major cities such as New York, and new research has found that there are significant disparities in the distribution of traffic fatalities between ethnic groups in the United States.” Glenn A. Herman, NYC Bike Accident Lawyer.

The 2022 study was conducted by researchers at Harvard University and Boston University and was published in the American Journal of Preventive Medicine, which is the official journal of the American College of Preventive Medicine and the Association for Prevention Teaching and Research and focuses on prevention research, teaching, practice, and policy.

Researchers used the 2017 National Household Travel Survey to estimate person-miles traveled by different racial and ethnic groups using different modes of transport. They used data from the U.S. Fatality Analysis Reporting systems from 2016-2018 to calculate a three-year average of traffic fatalities for each racial or ethnic group and subgroup. The figures were then used to calculate fatality rates per mile.

The study had several main findings:

“Traffic fatalities are a substantial and preventable public health challenge in America that disproportionately affects Black and Hispanic Americans,” said the researchers, “This analysis reveals that observed disparities by race/ethnicity in traffic fatalities are even greater than previously thought after accounting for differences in activity levels.”

Past studies have found that Indigenous Americans are by far the most likely to be killed by a traffic accident while walking. The researchers highlight several structural issues that may contribute to the findings.

If you have been involved in a traffic act in New York City, contact a personal injury lawyer who has experience working with intersectional clients to determine if you are entitled to compensation.

Our New York City Bike Personal Injury attorneys take the time to learn every aspect of your case during our initial meeting in order to properly evaluate the full extent of the damages you or a loved one have suffered. We have been representing seriously injured New Yorkers for over 25 years. Born, raised, and living in the City, we know that when you have been injured in this town, you need an attorney to protect your rights and explain the law to you in a way you can understand.

For a no-charge consultation today to discuss the details of your injury event: https://hermannyc.com/free-case-consultation/

Attorney Advertising.” The information on this site is not, nor is it intended to be, legal advice. We invite you to contact us and welcome your calls and e-mails regarding your individual situation. Contacting us does not create an attorney-client relationship. Some cases may be handled with co-counsel. 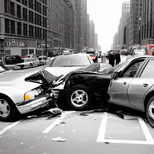 Late night on September 24, the driver of a red Nissan smashed into several cars and then into a dining shed. The incident happened along East 111st in East Harlem at approximately 10:15 pm. Th...