In the Bicycle Injuries and Accidents ebook, attorney Glenn Herman educates New Yorkers on what they should know about bicycle injuries and accidents but don’t necessarily realize.

Herman shared in his ebook how his law firm has managed to get a settlement for a severely injured cyclist within 90 days.

“We represented a 40-year-old man riding his bicycle home one evening when he was struck by an SUV at a Brooklyn intersection. The man sustained very significant injuries, which required hospitalization and surgery,” Herman wrote.

“The case was very challenging, yet we were able to negotiate a settlement for the full proceeds of the SUV's insurance policy. The case was put into suit immediately, by notifying the insurance company, settlement and payout were negotiated and secured within 90 days.”

In the ebook, Herman mentioned how the pandemic has led to a bike boom in New York City, which also means that there will also be a rise in cyclist injuries and deaths.

“For people living in cities, especially cities like New York, the arrival of COVID-19 brought with it a change in our daily lives. One of those changes was a boom in bicycle use. Many people who rely on public transportation like subways and buses now feel that such means of transportation pose a health risk. For many, cycling has become the preferred way to get to work and get around the cities.”

“Local bicycle shops have been selling out of most bicycles under $1000. Bikeshare programs, such as the Citibike program in New York City, have seen an unprecedented rise in use,” Herman shared. “With the rise in cycling, especially in cities like New York, it is anticipated that there will be a concomitant rise in cyclist injuries and deaths.”

Herman wrote in detail pages of bicycle accident data in New York City and compared it to other states in the country. He also explained the most common types of cyclist injuries and presented three case studies about bicycle accidents and injuries every New Yorker should know.

Born and raised in New York City, Glenn has been fighting for injury victims for over 25 years. Glenn has a unique ability to make clients comfortable to discuss their legal and personal issues and explain the law in a way that they can understand. He has expertise in all areas of personal injury litigation, including medical malpractice, bus, automobile, and motorcycle accidents, bicycle accidents, construction accidents, premises negligence, aviation accidents, police excessive force, and civil rights cases, uninsured/underinsured motorists’ cases, products liability, defective medical devices and drugs, slip and fall cases, municipal liability and wrongful death. 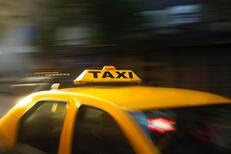 A 60-year-old taxi driver tried to turn left on Broadway around 1 p.m. on Monday, June 20, when he collided with a bicyclist moving southbound near 28th and 29th streets, police said. The impact ...

What is a Driver's Duty of Care to Pedestrians Under New York Law? Driver Negligence Explained